A Sucker Born Every Minute

“Barnum’s biographer Arthur H. Saxon tried to track down when Barnum had uttered this phrase but was unable to verify it. According to Saxon, “There’s no contemporary account of it, or even any suggestion that the word ‘sucker’ was used in the derogatory sense in his day. Barnum was just not the type to disparage his patrons.”[1] 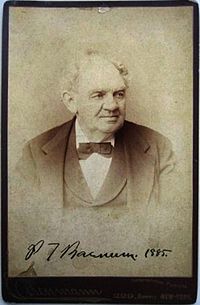 Some sources claim that it is most likely from famous con-man Joseph (“Paper Collar Joe”) Bessimer,[2] and other sources say that it was actually uttered by David Hannum in reference to Barnum’s part in the Cardiff Giant hoax.[citation needed] Hannum was exhibiting the “original” giant and had unsuccessfully sued Barnum for exhibiting a copy and claiming that it was the original. Crowds continued to pay to see Barnum’s exhibit, even after both it and the original had been proven to be fakes.

Another source credits late 1860s Chicago saloon owner Michael Cassius McDonald as the originator of the aphorism. According to the book Gem of the Prairie: Chicago Underworld (1940) by Herbert Asbury, McDonald was equipping his gambling house known as The Store when his partner expressed concern over the large number of roulette wheels and faro tables being installed and their ability to get enough players. McDonald then allegedly said, “Don’t worry about that, there’s a sucker born every minute.”

Well, it is a useful phrase no matter its author. I thought of it this morning as “Morning Joe” carried news clips of the crowd streaming into another Trump Rally. Among those interviewed, most were proud of having had their suspicions confirmed by “Q” and “Q-Anon.”

The level of ignorance among the American populace seems to be growing like a raging brain cancer. Truth is probably otherwise. In all likelihood, ignorance is not more prevalent than ever but there may be a couple of contemporary reasons for it to seem so. We live longer now than we did decades ago. Suckers live longer too, so it may seem that they’ve increased. Social media and the Internet can now draw larger crowds than a Barnum ‘barker’ could assemble patrons to see the Bearded Lady.

So it is probably same crowd flocking to be fascinated by a similar fake attraction. But they certain do look like my neighbors.

5 responses to “A Sucker Born Every Minute”